The 2018 Emerging Leaders in Victorian Agriculture (ELVA) awards were presented by The Royal Agricultural Society of Victoria (RASV) on Thursday 28 June during the sixth annual Agriculture: The Heart of Victoria gala dinner – the Victorian agricultural industry’s night of nights. Co-hosted by RASV and the Victorian Farmers Federation, the event is a celebration of the outstanding food, wine and beer produced by Victorian farmers and makers.

Each recipient received a cash bursary of $10,000, to go towards their career development and access to valuable professional development activities through the support of RASV.

The recipients of the awards were Amelia Bright and Dr Jo Newton. The program is open to industry participants aged under 40 years old who have achieved in one of more areas of professional, industry and community contribution and demonstrated leadership qualities such as innovation, communication or ethical conduct.

‘This is a significant award, and one that continues our tradition of supporting and promoting the Victorian Agriculture industry. Amelia and Jo are both very deserving recipients and I’m looking forward to following their journeys as they work with fellow industry leaders through RASV’s calendar of events’, said RASV CEO, Paul Guerra.

Amelia is the Co-Owner of Amber Creek Farms and Sawmill and Co-Founder of Prom Coast Food Collective. She has actively demonstrated leadership qualities over the last 5 years since arriving in South Gippsland. Together with her husband and daughter, she owns and operates Amber Creek Farm and Sawmill in Fish Creek, where they grow high quality, ethically produced, pasture raised pork.

She is behind the Prom Coast Food Collective, which, along with her co-founder, she started in 2016 in a matter of weeks with no start-up capital and 18 producers on board. The Prom Coast Food Collective provides support to local businesses with similar ethical models around sustainability and animal welfare, and has developed a successful food distribution network in their local area.

Amelia is passionate about regional vitality, small farm viability and bringing the best of local produce to local families.

Jo is a Research Scientist in Genetics at Agriculture Victoria - Department of Economic Development, Jobs, Transport & Resources. Jo balances her work for Agriculture Victoria with advocacy of youth in agriculture. Her contributions to the ImProving Herds Project have played a significant role in increasing the dairy industry’s adoption of genetic tools and technologies.

A big believer in paying it forward, Jo dedicates a considerable portion of her spare time to speaking at schools and events, mentoring students and junior scientists and volunteering at agricultural shows.

Part of RASV’s focus on increasing youth participation in agriculture throughout their calendar of events, the ELVA awards were judged by a panel of industry professionals, after nominations were received earlier this year.

Nominations for next year’s awards will open in early 2019. 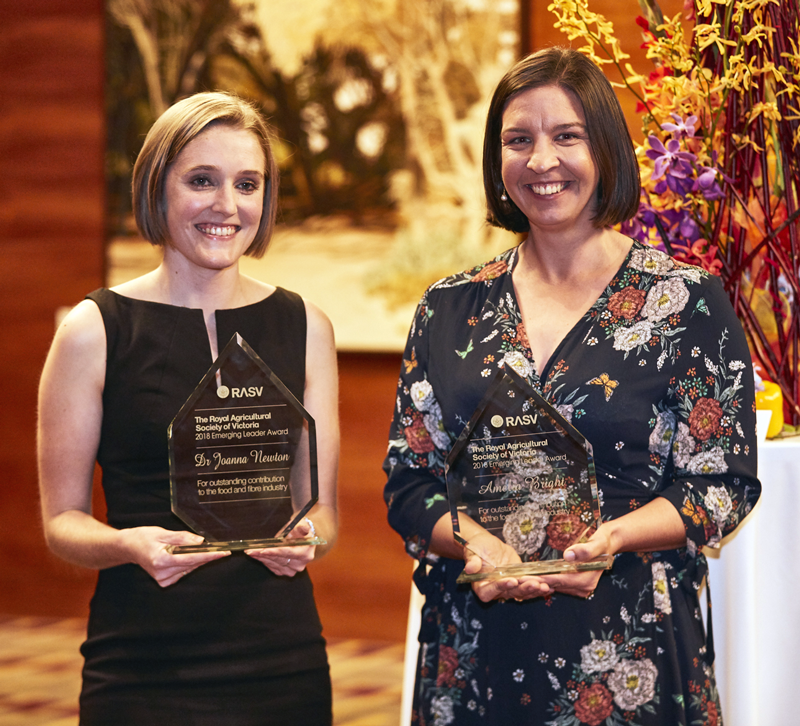