Terry and Ada Wilcox of Alaqadar Afghan Hounds are the very proud breeders of “Riggs”, the 2018 Royal Melbourne Show All Breeds Championship Show winner. In this interview they share with us some of their time in Afghans and the development of Alaqadar Afghans, together with their breeding ideas.

In 1970 Terry and Ada purchased the black and tan Afghan Hound puppy, Binylda Alcides, sired by Ch. Chandhara Tardis Arrakesh (Imp. UK). This pup was the consummate show personality and he went on to win Best Puppy in Show at 7 major metropolitan shows.  The trophies back then provided multiple TVs and kitchen utensils they so needed at the time! It was all so easy and Terry and Ada were smitten!

Later on during a visit to Adelaide that year, they obtained a black masked silver puppy bitch, Tahkira Tamoroc, who was heavily linebred on UK lines. In 1973 they bred her to David Roche`s Ch. Coastwind Holyman (Imp. USA). This litter produced three remarkable siblings in Ch. Alaqadar De Fauves, Ch. Alaqadar Chiaroscuro and Ch. Alaqadar Arabesque, all who went on to ride the crest of the Afghan show scene for almost a decade. Terry and Ada were extremely fortunate and grateful to have this serendipitous success!

Breeding philosophy and time away

Both Terry and Ada have always been fascinated by the unique number of breed hallmarks this breed has, having evolved in the harshest of environments. It has been their objective to accumulate as many of these attributes into the Alaqadar breeding program as possible and to always breed to the standard first and foremost.

Ch. Alaqadar De Fauves was a multiple Royal Challenge winner and awarded the fantastic and very memorable Best in Show at the Melbourne Royal in 1979. Subsequently he was sparingly shown, culminating with his Best in Group at Sydney Royal in 1981 under the late Hans Lehtinen (Finland).

Shortly afterwards they took a break from showing and breeding for almost 10 years, devoting time to attend Pony Club as part of raising two daughters.

As they moved away from horses, Terry and Ada rekindled their interests in showing and breeding and proceeded to seek attributes from new blood lines to complement and enhance their old lines.

They purchased Ch. Jallalabad Initiator and his sister Indisputable. Initiator went on to win Australian Show Dog of the Year, with his sister becoming their second foundation brood bitch. They now bred back to their old Defauves/Chiaroscuro lines of which there were ample interstate complementary lines available. Next they obtained semen from the heavily linebred NZ. Ch. Eros of Juwain.  This line was primitive and could only be found in New Zealand.

Terry and Ada believe line breeding is the only way to set type and work with unique breed characteristics, but the problem being, one can only progress with line breeding so far before you need to totally outcross and re-introduce hybrid vigor. It is important to employ bloodlines which both complement in breed type as well as structural soundness and have that all important well linebred pedigree.

By the turn of the millennium such was the case and they began casting their eye to bloodlines and dogs abroad. They both judge and found and collected semen from USA Ch. Jovan Cruise Control, “Jag”, a dog they had both judged and felt had the qualities they were seeking.

The beginning of ‘Riggs’

Riggs is linebred heavily to De Fauves and Chiaroscuro on his dam’s side and subsequently he has a close resemblance to those lines. The Afghan Hound standard calls for a unique gait and head carriage and Terry and Ada feel these attributes alone are what make this breed the King of Dogs and the stand out in the show ring.

They find the ideal time to assess Afghan puppies is between 6 to 8 weeks and they look for attitude, movement and conformation. It is easy to find the stand out, but there is always a chance that the slow maturing one will catch up and surpass. Heads can be difficult to assess as they keep changing until 3 years of age or longer.

Notable memories in a lifetime of achievement

The Wilcox’s won their first Royal Melbourne Show 39 years ago with Ch. Alaqadar De Fauves and this was a win far beyond their expectations. Riggs’ Royal win was a wonderful affirmation for Terry and Ada that people could identify with the attributes they so admire in this breed and the win has made them very proud.

Terry`s favourite memory was De Fauves winning his first Sydney Royal Challenge. Just to have competed with so many beautiful legendary Afghan Hound Champions of that period, returning with the challenge was the stuff dreams are made of.

When raising Afghan pups, they consider it paramount to offer them the broadest exposure and experiences possible. They lead train puppies from 8 weeks of age, on a loose lead to encourage head carriage and preferably following mum to the top paddock!

Riggs and Wayne Douglas’ overseas campaign was an absolute joy for Terry and Ada. To have him received so warmly and the witness the generosity shown to Wayne and Riggs was truly exemplary and a dream come true. Unfortunately they were unable to attend Crufts or the UK, but they caught up with them in Donaueschingen Germany, at the Sighthound Show and again at the World Dog Show in Amsterdam.

Terry and Ada have few words to describe the amazing experience to watch Wayne and Riggs compete so favourably in Europe, and all of these wonderful experiences were capped off with a fantastic Best in Show at their hometown Royal Melbourne Show.

Terry and Ada Wilcox of Alaqadar Afghan Hounds are very proud breeders and so thankful for what they have achieved. 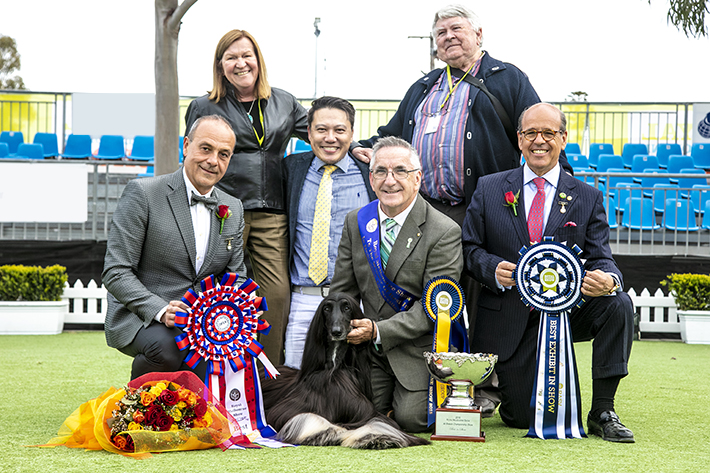