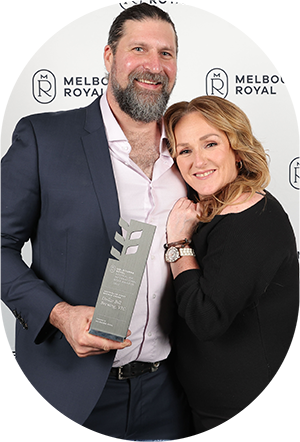 Dollar Bill Brewing is carving out a name for itself with its range of sour beers. Melbourne Royal spoke to these Australian International Beer Award winners.

Life as a gypsy brewer makes collaboration a necessity. With no brewing facilities of their own, working out of the breweries of others is a must. But for Dollar Bill Brewing, this approach is also a source of inspiration and industry camaraderie. Which made the 2022 Melbourne Royal Australian International Beer Awards results even sweeter for this Ballarat-based business.

Dollar Bill Brewing was awarded the Australian Gypsy Brewer trophy, plus a series of medals at this year’s awards. Two of the breweries whose facilities they use to make their beer, cider and mead, also received trophies or medals, Stomping Ground in Collingwood and Aunty Jack’s in Ballarat.

“I’ve worked in other industries and you don't have that camaraderie that you do with brewing,” Ed Nolle said.

Working alongside his wife Fiona, the pair are known for their Belgian-style sour and fruit beers, made using wild fermentation techniques and aged in wine barrels.

“We do wild and spontaneous ferments and a little bit of inoculated barrel aged sour stuff too,” Ed said.

“Basically, everything goes into barrel and sours up in barrel over three to four years.”

“Then we take our barrel aged product and we blend it together to make something interesting, something appealing, something with a little quirk to it.”

The aim, he says, is to offer the beer consumer variety, just like the wine industry does.

“So we've got this underlying funk, they call it ‘horse blanket’, or ‘wet dog’ or ‘goat’ kind of character. It might not sound appealing but it adds intrigue, it adds a little funk to your beers,” he said.

“That's typical in most of our barrels.”

This is then blended with ingredients such as fruit or hops for balance and character. Often sourced from local farmers.

“This year, we decided we needed to back it up, we didn't want to be a one hit wonder.”

The two golds were awarded in the Best Wood Aged/Barrel-Aged Beer category for their Aftermath blackcurrant wild ale in a can, and their Perception Brett Saison in a can.

The couple are plugging away at plans to set up a permanent base for their business. They are currently seeking the approvals to develop a large site in Ballarat, including growing some of the fruit integral to their style of beer.

One hit wonders? With award winning products and a strong vision for the future, not likely!

Melbourne Royal Australian International Beer Awards is the largest annual beer competition in the world assessing both draught and packaged beer, in 2022 attracting 2630 entries from 355 breweries in 20 countries.