The Australian International Beer Awards (AIBA) may be over for another year but we’re still in awe of the 2019 trophy winners – especially this one.

Part of Marie Claire’s AIBA win can be attributed to The Big Issue: Sexism, a piece which addresses how the stereotype of beer as a man’s drink affects the experiences of women in the industry.

The piece highlights situations where women at all levels of involvement in the beer industry have experienced sexism, ranging from situations where their opinions were dismissed, to more sinister occurrences of sexual harassment. The idea for the piece was born out of frustration and difficulty in just accepting these situations as a normal part of being in the industry.

With a determination to incite change but aware that being a voice was a huge responsibility, Marie Claire battled with how to do the editorial justice.

Having seen so many Facebook and website comments unfairly discounting other sexism pieces as rambling opinion or even worse, a “big whinge,” and intending for people to take the article seriously, Marie Claire took a factual approach to writing the piece, something which resonated well with her as a scientist. She interviewed as many women as possible, collecting stories of their experiences. She interviewed those with opposing views too, to understand how to best communicate these experiences to those less willing to understand or accept them as truths.

As she was conducting interviews, Marie Claire was constantly changing the format of the article in her mind, and it took her over a year to put the original idea onto paper.

Along with highlighting some of the negative experiences of women in the beer industry, the finished piece presents some recommendations for how people can drive positive change.

When considering how she’d like to see her article impose change, Marie Claire said she believes all it may take is for people to be more mindful and considerate. As the article suggests, just by taking care of the small things, like not referring to weak or fruity beers as “girly”, not being surprised by the presence of women in a brewery or bar, or marketing or advertising in a more gender-neutral way, then hopefully, the rest will take care of itself.

Marie Claire describes the feedback on the article as “absolutely phenomenal” and felt the immense support of a forward-thinking and humble industry that’s willing to listen to and implement change.

“I feel like the majority of people who commented on the article were happy to have the experiences shared. Women were happy to know they weren’t alone, men were happy to understand the situation (if they didn’t already), and in both cases, it was great to see promises of progress,” Marie Claire said.

Since its introduction in 2014, the AIBA Best Media award has shone a light on some of Australia’s best beer writers, recognising and rewarding them for the very important role they play.

A beer can certainly stand on its own – it can taste great and the artwork can look good. But, what attracts a lot of people to craft beer (including Marie Claire), is uncovering that next layer and discovering the story behind the beer.

Being able to connect the beer to the person or brewery who made it and understand how it was developed and produced adds a lot more personality to the beer, which in turn adds interest not just to the beer itself, but to the industry as a whole.

Women tend to be underrepresented in the beer industry and Marie Claire’s win serves as a reminder that women are contributing to all aspects of the industry – brewing, bartending, media, communication, and everything in between. 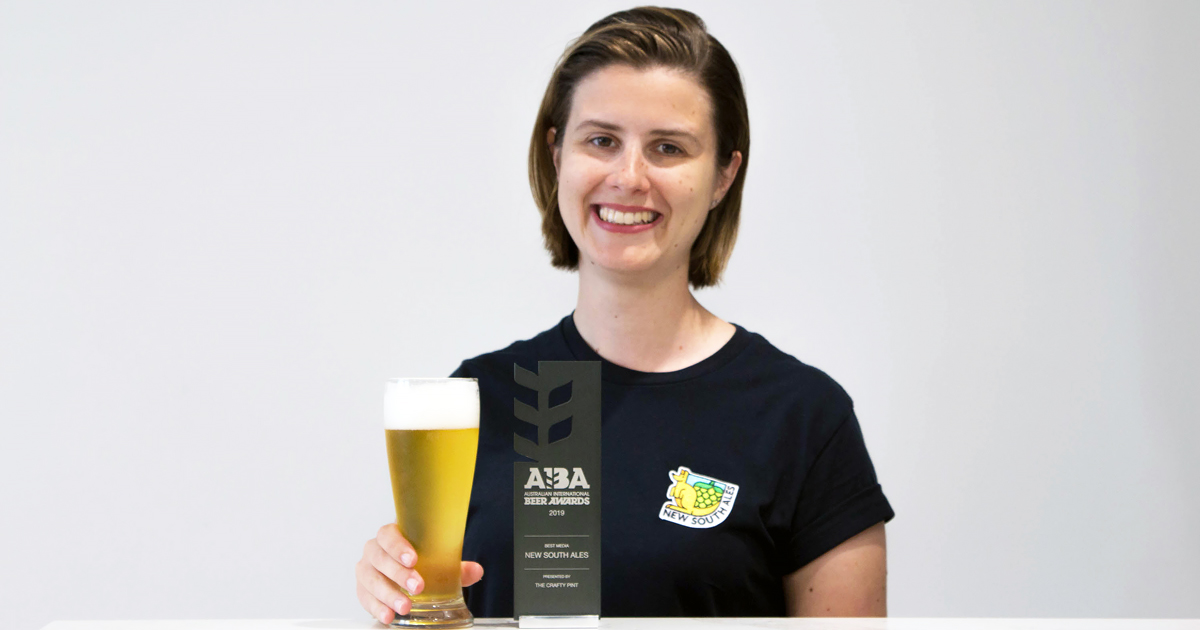 Marie Claire started writing about beer in late 2015 when she moved from the craft beer wasteland that is Sydney’s North Shore (not to be confused with the brewery-rich Northern Beaches) to the Inner West. Starting out writing review-style articles about breweries she visited, she soon turned her focus to people, breweries or beers with interesting stories.

Marie Claire started writing for Melbourne-based Froth Craft Beer Magazine in 2016, owned by the “wonderful and talented” Emily Day, and soon after for The Crafty Pint, as well as continuing work on her own blog New South Ales.

She didn’t have a formal education in media or journalism and admits that English was her most disliked high school subject. Winning the AIBA Best Media 2019 Award is a turn of events that her older sister, who spent countless hours helping her with essays about Shakespeare, now finds hilariously ironic.