An interview with 2017 Best in Obedience Trial Winner

Go behind the scenes with the owners of the 2017 Royal Melbourne Show All Breeds Championship Show Best in Obedience Trial Winner, Stuart and Megan Macdonald, in this exclusive interview.

Here, they share their valuable knowledge and experience, as preparations begin for the 2018 Royal Melbourne Show All Breeds Championship Show.

Success before the Royal Melbourne Show

Gr CH Stobar Quentin AZ BSC.1 CDX ET RN (Quentin) was purchased as Stuart’s first competition dog with the sole aim of competing in obedience, however, they were his fourth owner and he had already accumulated 56 points towards his Champion title. His previous owner suggested they continue showing him to gain his remaining points and once bitten by the bug Megan not only showed him to his Australian Champion title but also obtained his Grand Champion title in 2017. With so many show commitments, obedience competition has initially taken a back seat but Quentin and Stuart still managed to obtain their CCD, CD and CDX titles also winning several “Best Dual Performance” awards at German Shepherd events along the way.

Megan, Stuart and Quentin first competed at the Royal Melbourne Show in 2014 with a few Show friends. Their aim was for a fun day out as they found the atmosphere exciting and a great opportunity to showcase their breed and interact with the general public. They have competed successfully each year since then and after seeing a friend compete in both conformation and obedience in 2016 they thought it would be great to train and prepare Quentin for both events in 2017.

Stuart says that Quentin is a quick learner and eager to please which has made it a pleasure to train him and compete in obedience. Stuart has also been on a very steep learning curve as he has not competed in obedience trials before. He admits that he believed once you had trained a dog to a particular level they always performed the same each time – he has since learnt this is not the case and occasionally Quentin will forget exercises such as the recall and when called will just sit there looking at him. That’s the joy of trialling and working with dogs – you have to take the good with the bad and it happens to everyone.

Choosing Quentin was a decision made based on him having registration papers and that he looked like a nice dog. With the knowledge that Stuart and Megan have now acquired there were far more criteria that their new puppy had to meet before becoming part of the family – they were looking for a puppy that is active, can interact well with humans and displays an outgoing personality with a good pedigree as well. A new puppy is a chance to mould your future competition dog and Stuart says it is most important to create a solid bond with the dog and make sure any training is fun so that your puppy becomes a happy worker and has trust in everything you ask of it. Their dogs are their pets first and are included as part of the family so it is important to them that their dogs enjoy trialling and showing

Preparing Quentin for the Show

Preparing Quentin for the 2017 Royal Melbourne Show was a balance of show and obedience training. Stuart runs with Quentin twice a week and includes plenty of free running as well for general fitness. For obedience, training will be included in a walk to the park with 5-10 minutes of varied exercises to keep Quentin motivated and always finishing with a game with a favourite tug toy. Variety, moderation and fun are the keys to keeping Quentin happy. Lots of grooming and a carefully planned diet were important to his success as well. Leading up to the 2017 Royal Melbourne Show Quentin had not managed a Qualifying score in the last 3 Obedience Trials he had competed in so Stuart was just aiming for a Qualifying score and never imagined that Quentin could achieve Best in Trial. Quentin loves the noises, crowds and smells at the Royal Melbourne Show and senses the excitement from Megan and Stuart ensuring that he performs at his best on the day.

After the rush of exhibiting at the Show

After his success in 2017, Quentin celebrated with a sleep in, dined on steak and roast chicken and tested out some new toys. His proud owners celebrated with a meal at a fancy restaurant and some champagne – after all, you don’t get to celebrate those sorts of achievements every day!

Megan, Stuart and Quentin will be back at the Royal Melbourne Show in 2018 as they love the excitement of simply being there and catching up with many of their friends who are competing in conformation and performance events and cheering them on. Quentin is now progressing to the next level of obedience providing some new challenges for Stuart and they are also considering trying out Tracking in the future. They would just like to remind everyone that no matter what the results, you take home the best dog at the end of the day. 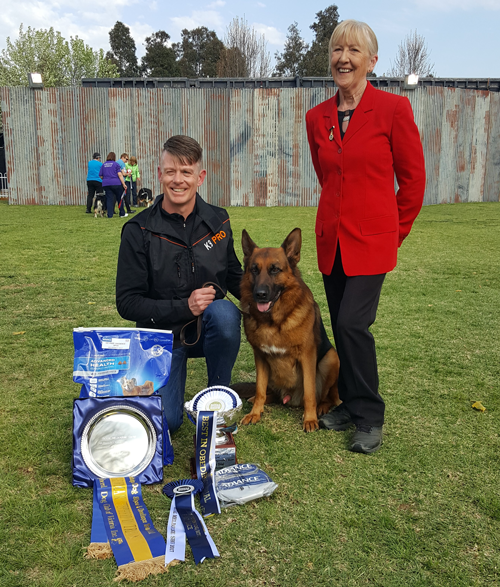